You are here: Home » Garden and Greenhouse » Pepper Crop Report-2015 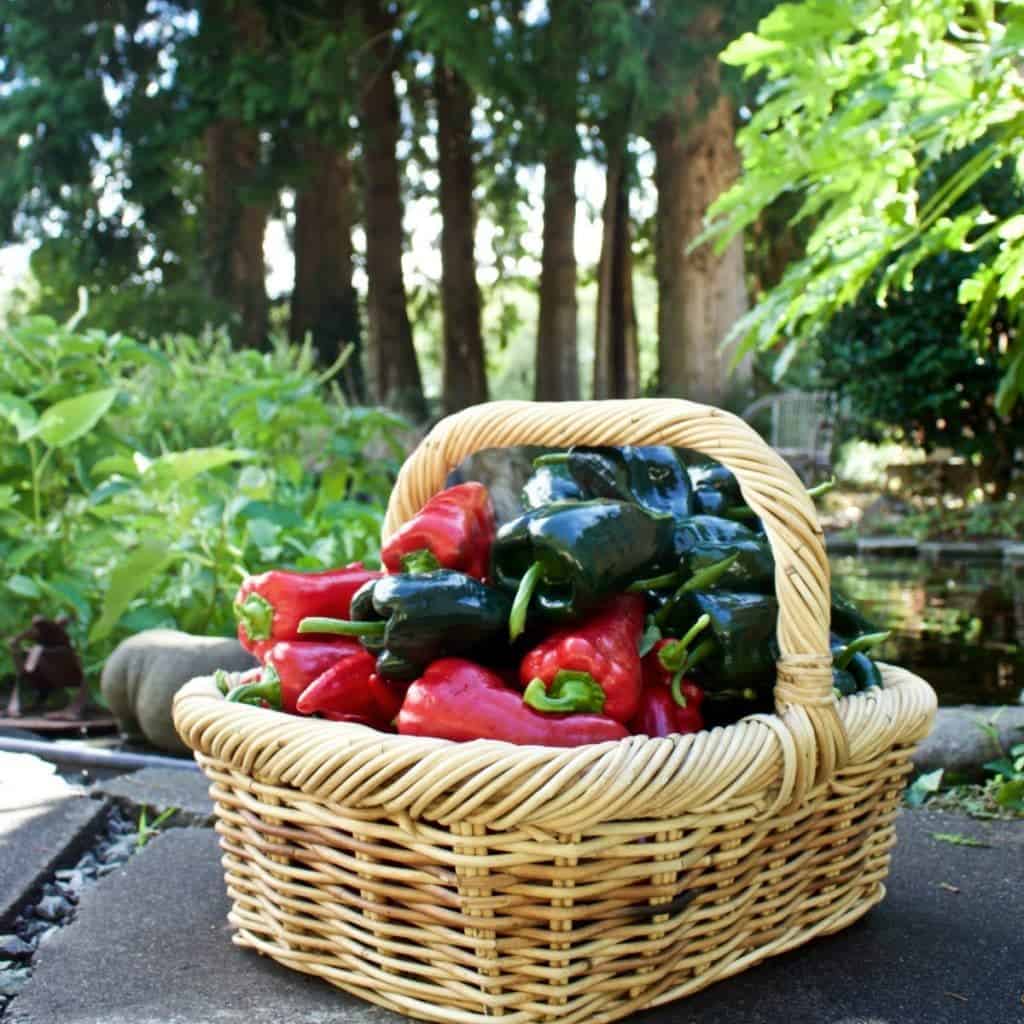 Garden pepper crop 2015 This is one trip out to the garden. Dave brought in this enormous basket of gorgeous peppers! 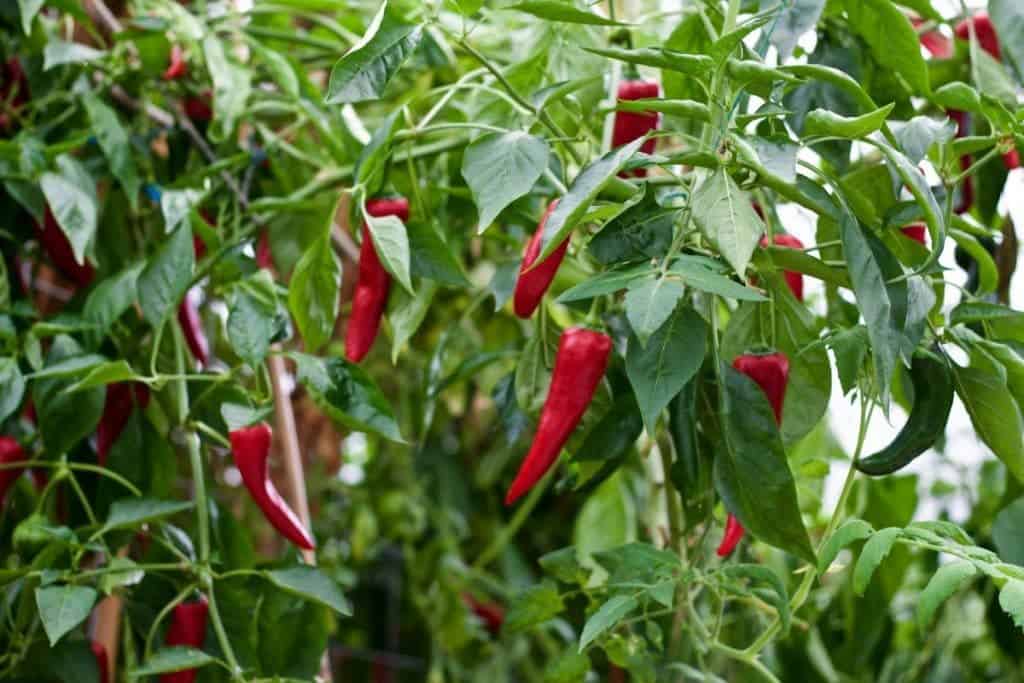 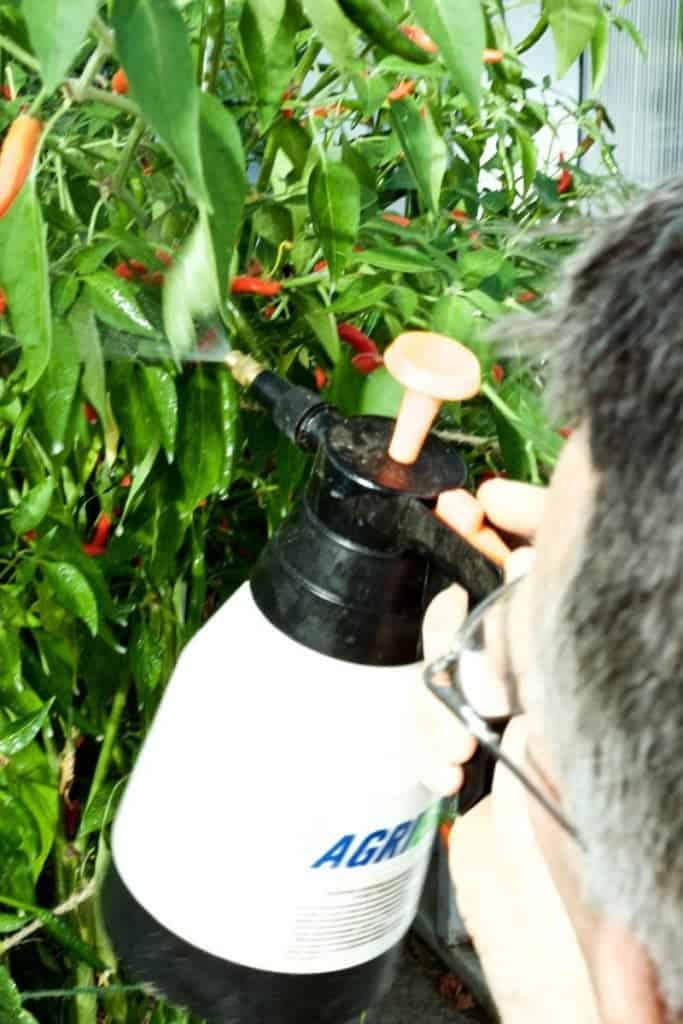 Dave always had this handy small sprayer going to kill aphids this summer in the greenhouse. The aphids never bothered the outdoor pepper crop!

A very different story outside: 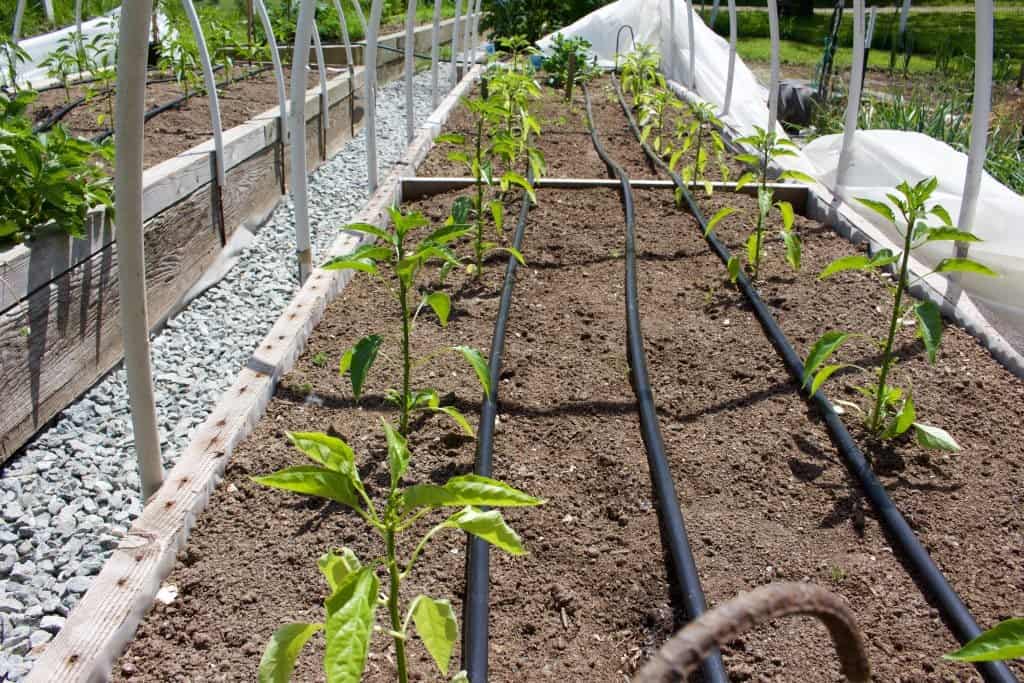 Garden pepper crop 2015: These poor little peppers were babied for months before they decided to suck it up and grow outside. They wanted the greenhouse! Notice the plastic off to the side. Every night we covered those peppers to keep them warm.

The outdoor transplants weren’t happy about moving outside. We thought they were going to turn toes up and die on us for quite a while. They yellowed… and drooped… and a few did actually die. Most of them just sat in the rows, miserably, for a long, long time… Then one bed started to make some headway.

Dave babied them along. He studied on them, tried every gardener’s trick he could find to encourage them to grow! He carefully covered them with plastic every night in his hooped beds if he thought they might catch a chill. After a month or so(It was a VERY long time), one of the pepper beds suddenly showed signs of life and started to grow. The other pepper bed continued to languish all yellow and small.

This peppers were all the same age, planted into the garden at the same time. Notice the wood frame Dave built to support the taller row of peppers transplanted at the same time. We never could figure out why one row was so slow to grow! 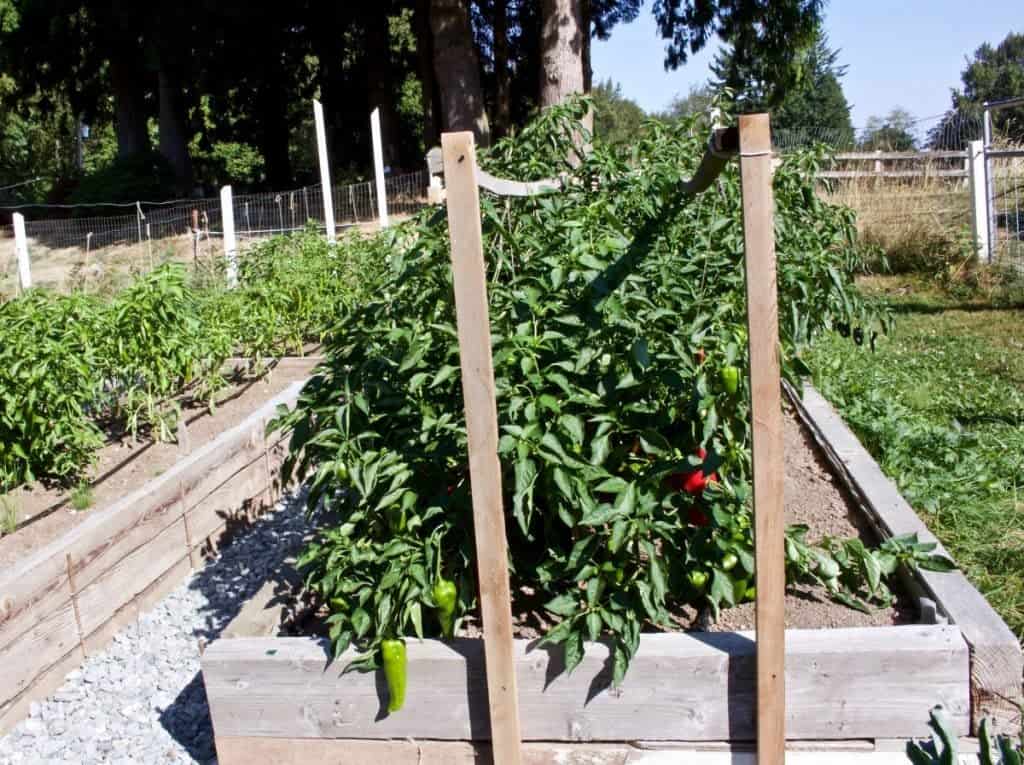 These peppers were all started from seed at the same time and transplanted to the outdoor garden at the same time. Look at the plants! such a difference between the beds!

We never did figure out what was holding back the one bed, other than a bad attitude. But eventually, and rather suddenly, even that bed did get growing and in it own time, produced lovely peppers! TONS of peppers! It should be noted we had a STELLAR growing year for peppers, weather wise. Our summer was hot, sunny and dry. I loved it! So did the peppers! 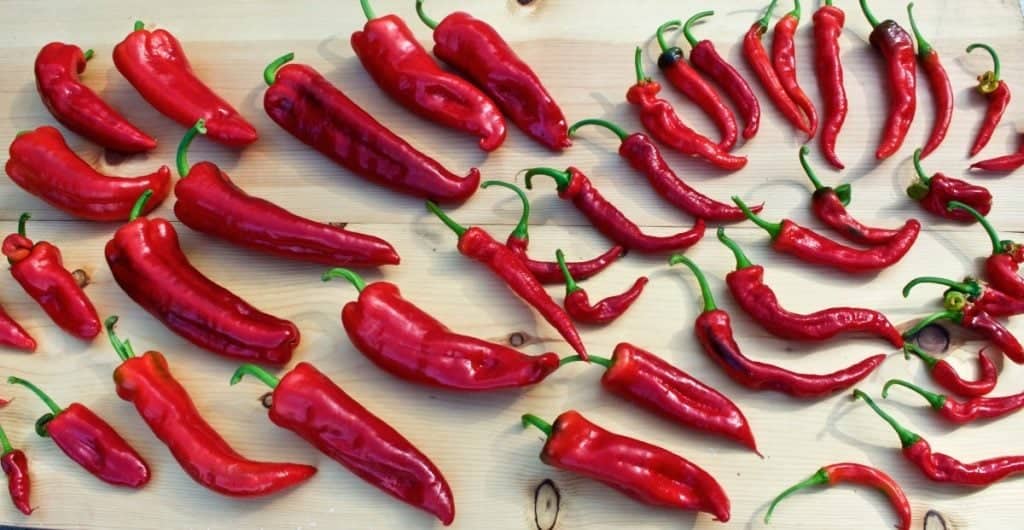 All these varieties of peppers were growing in the outdoor garden this summer. Carmen, red flames, Cheyennes and Tiburons all grew outside in 2015 and produced well …after a very slow start!

Tiburons are our very favorite peppers for a roasting heat level 2. These peppers have EXCELLENT flavor. And they did grow well outside… eventually.

We harvested peppers for months and still are. The Bangkok Peppers are in the greenhouse now. Full of tiny hot peppers that I have no clue what to do with. We never grow hot peppers, since we are both happier with the low heat varieties. But Dave wanted to try these lil cuties. So they are in the greenhouse. Blooming their lil hearts out! I’m drying and freezing most of the crop. I use them in recipes like Peanut Sauce over Thai Zoodles; but there is no way I’m going to use that many! We have given entire huge baskets of peppers away to friends and family that will use them. Still my freezer is overflowing with dried, frozen peppers! Next year, Dave has to make some tough choices. Way fewer pepper plants please! 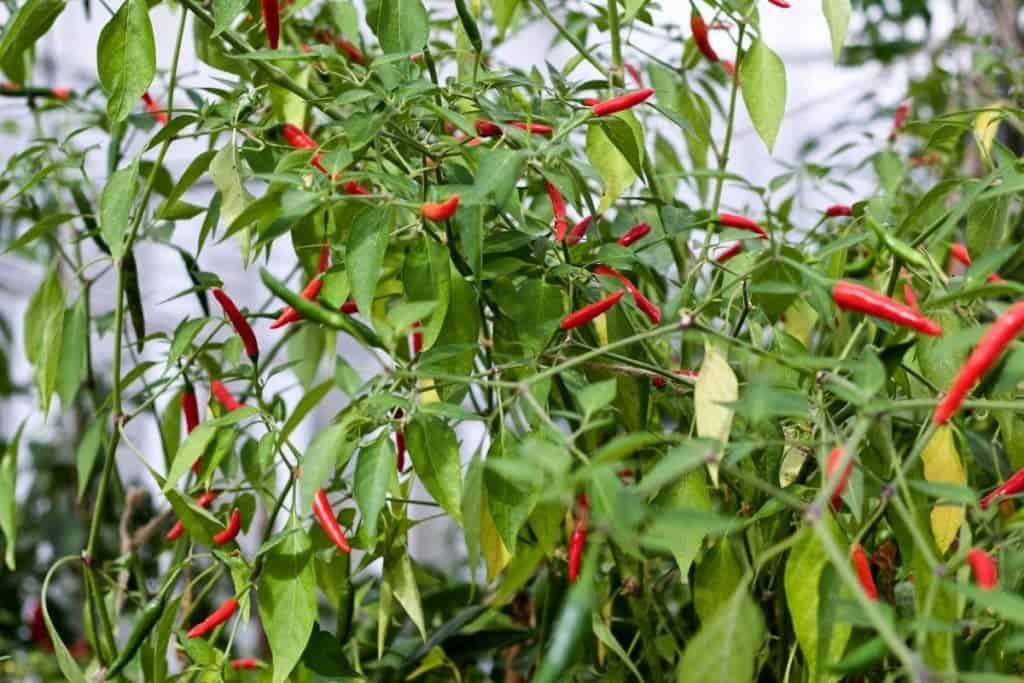 Dave just pulled all of the outdoor pepper plants out this last week (Last week of October). The plants were starting to show a bit of black mold on the stems. We don’t want to encourage mold here. We have an abundance of it! So the outdoor crop is gone now. Dave also pulled most of the greenhouse pepper plants for the same reason. (different mold in there but still a problem). Our humidity is extremely high here; so at 50 plus degrees we grow a diversity of molds! We are so tired of our huge, bountiful crop of peppers…. we actually don’t mind losing them! (or maybe that’s just me).

That’s about it for the 2015 pepper report. We love them! Glad they are almost gone though! Till next year peppers! 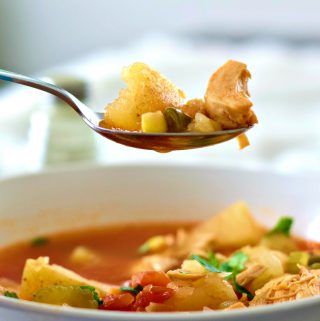 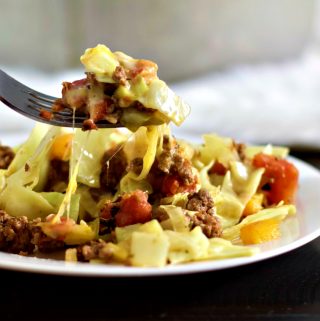 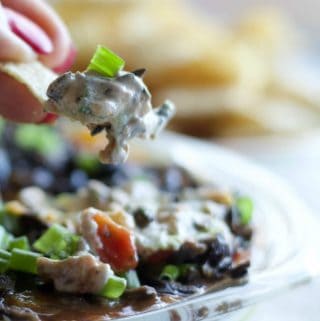