You are here: Home » Garden and Greenhouse » Our Greenhouse Produce and Projects 2014

Our Greenhouse Produce and Projects 2014

You are here: Home » Garden and Greenhouse » Our Greenhouse Produce and Projects 2014 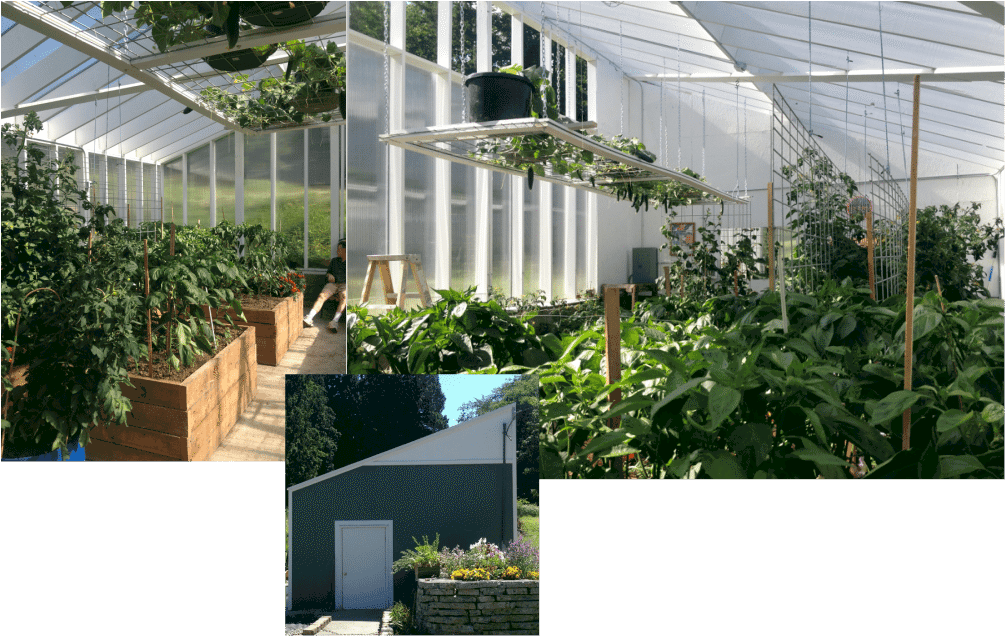 Our Greenhouse Produce summary for 2014

This is the last day of 2014. Our greenhouse is almost empty now. Dave pulled out the tomatoes  in November and pepper plants a couple weeks back and I’m cooking the last of them this week. Now come the long months until we can again enjoy our home-grown greenhouse peppers, cucumbers and tomatoes. Here is a summary of our greenhouse produce and projects for 2014 and a peek into what we have planned in there for 2015.

Our greenhouse produce has been a source of much joy and happy, creative meals and recipes this year!

We enjoyed our Corinto cucumbers in 2014 so much. We grew our cukes in containers in the The upper trellis. Dave installed the upper trellis last spring. It is horizontal at about 8 feet high over the walkway in our greenhouse. The cucumbers did very well up there. The only difficulty was constantly watering the containers on the trellis. It required a ladder and was a bit awkward for us. We think it was worth it though. The cucumbers were absolutely perfect and tasted so delicious. We loved it that the cukes dropped through the wire mostly for easy picking! They were excellent for slicing, salads and fresh cucumber salsa! 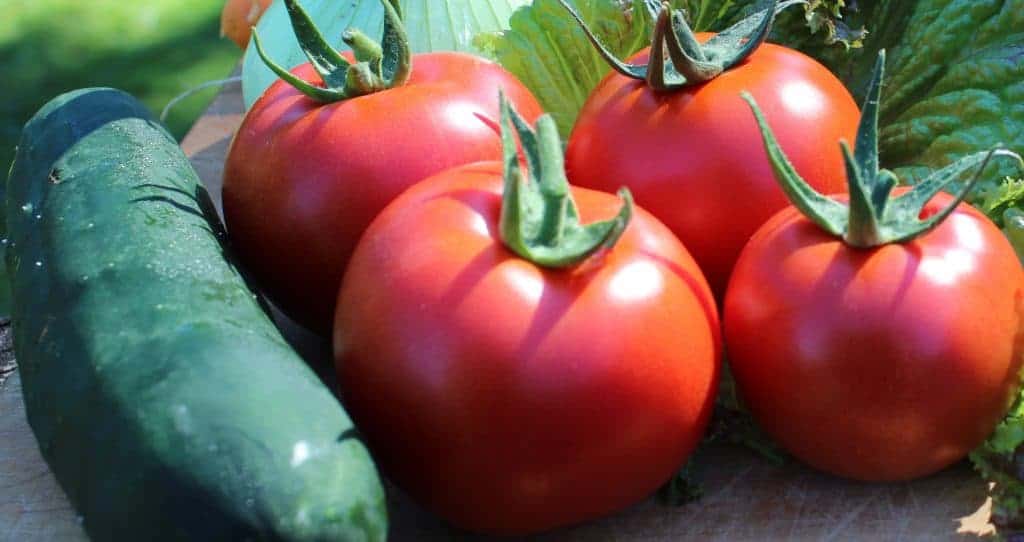 Our Greenhouse Produce: The peppers were a huge success. 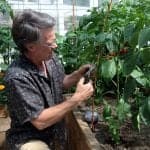 Dave checking his peppers for aphids 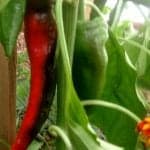 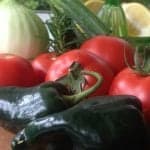 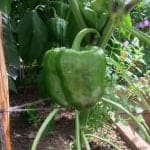 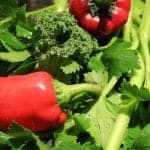 Our fall harvest. Garden greens and greenhouse peppers and tomatoes 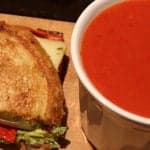 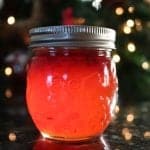 Pepper Jam.A beautiful homemade gift made from our greenhouse peppers.2014 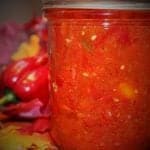 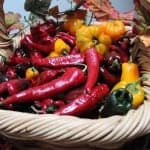 Harvested peppers 2014. We had this basket full of peppers from September to November!

Dave grew over 50 pepper plants of several different varieties. My favorites were the Krimson Lee peppers. They are beautiful, flavorful and so useful in the kitchen. A great roasting and sauté pepper!

We loved them sliced fresh in salads and added to just about any recipe in the crock pot. Especially good in soups like pepper soup and roasted pepper tomato soup  and great in roasted pepper sauce and lovely in salads like fall salad or ANY salad!

They finally did ripen though and made some lovely stuffed peppers for us. the Tiburon peppers got off to a slow start but finished beautifully. They ripened in late September and lasted until early December! 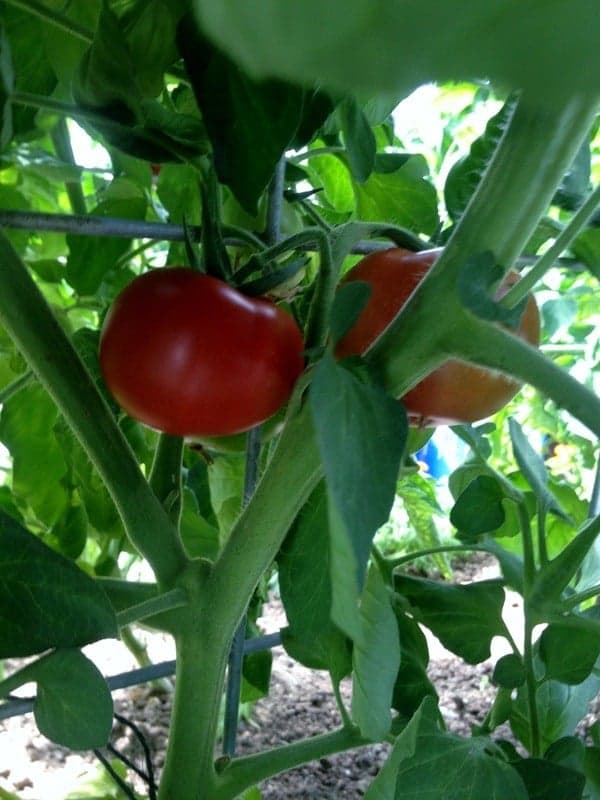 Our greenhouse tomatoes on the vine

The tomatoes grew and grew and grew up the trellis Dave built. We enjoyed picking them easily through the hog wire he used. He thought tying the tomatoes onto the trellis worked very well and saved him tons of time compared to his system in his old tomato house. Overall we were energized and happy to be working out there this year. I enjoyed going out to the greenhouse to pick gorgeous fresh produce for our meals. I was even motivated to get out my water bath canner and make pepper jam and tomato salsa! We learned so much and had a blast out there. Busy, fun productive times. For a quick video tour of the tomatoes and greenhouse go here.

2014 Greenhouse Problems: There were a few. We had aphids almost the entire summer. We learned about organic pest control methods, insecticidal soaps and ladybugs. We had some problems with fungus on the tomatoes and pepper plants and the cucumbers got powdery mildew late in  August. Nothing we haven’t had in the outdoor garden but somewhat disappointing in the greenhouse. We are reading and learning. Gardening is a dynamic, never ending hobby. We love it!

A couple of 2015  Greenhouse Projects: My husband is not good at sitting. He keeps busy around here even in the cold months. That greenhouse has projects going on right now!

Next year(which is next week,) Dave is installing an automatic watering system after he replenishes the greenhouse raised beds soil for next years growing. To prepare the beds, He has taken out about a foot of topsoil off the beds( put it in our extra large flower bed) and a huge pile of new soil for the greenhouse beds is sitting outside waiting to  layer the new dirt over the old. He’s planning to add in bone meal, Epsom salts and other goodies to give the new crops a nice boost when they grow roots long enough to find the nutrients underneath. After he replenishes the topsoil he will lay his watering pipes on top of the soil. I’ll post a gallery of the progress of that project as he completes it.

We have decided to grow strawberries vertically in the greenhouse this year. Last year we had that idea but the cucumbers won the upper trellis and the strawberries wound up outside in a raised garden bed. They loved it out there and are now producing lots of new starts that Dave has begun to transplant into the greenhouse. He has built a couple of long narrow beds for the new starts and will suspend them from the upper trellis. More pictures and a new post as he completes that project as well.

Here is a gallery of our Greenhouse produce 2014 and what we did with some of them. 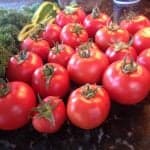 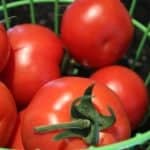 Vine ripened on the vine, in our greenhouse 2014 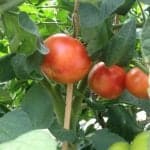 The seed catalogs are arriving and Dave is like a kid in a candy shop. He already has a load of new varieties of peppers, cucumbers and tomatoes picked for the greenhouse. He’s planning a new raised bed out on the greenhouse patio for outdoor varieties he would like to try. That man is always busy making plans and doing projects around here. We’ll keep you posted on his progress. 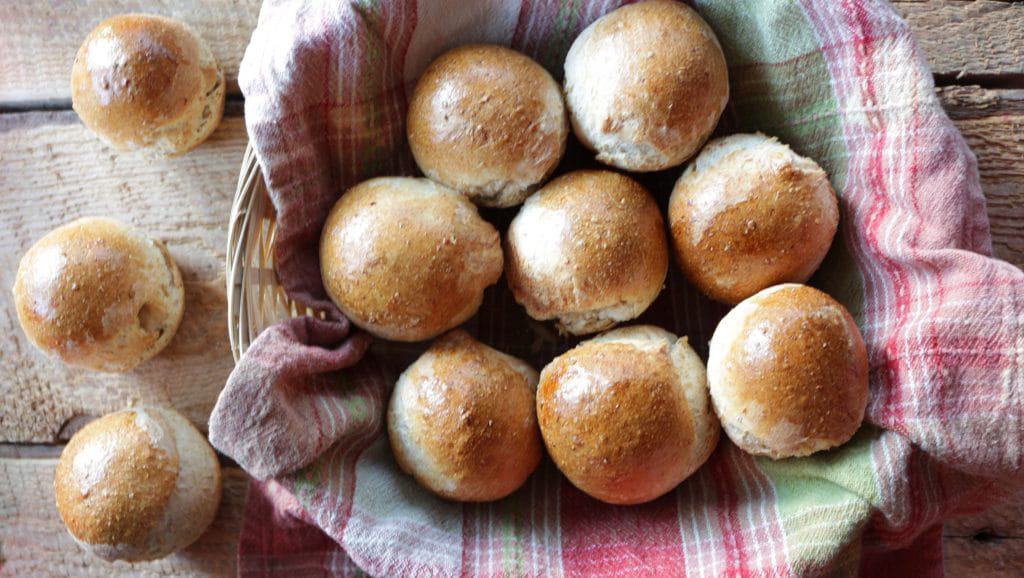 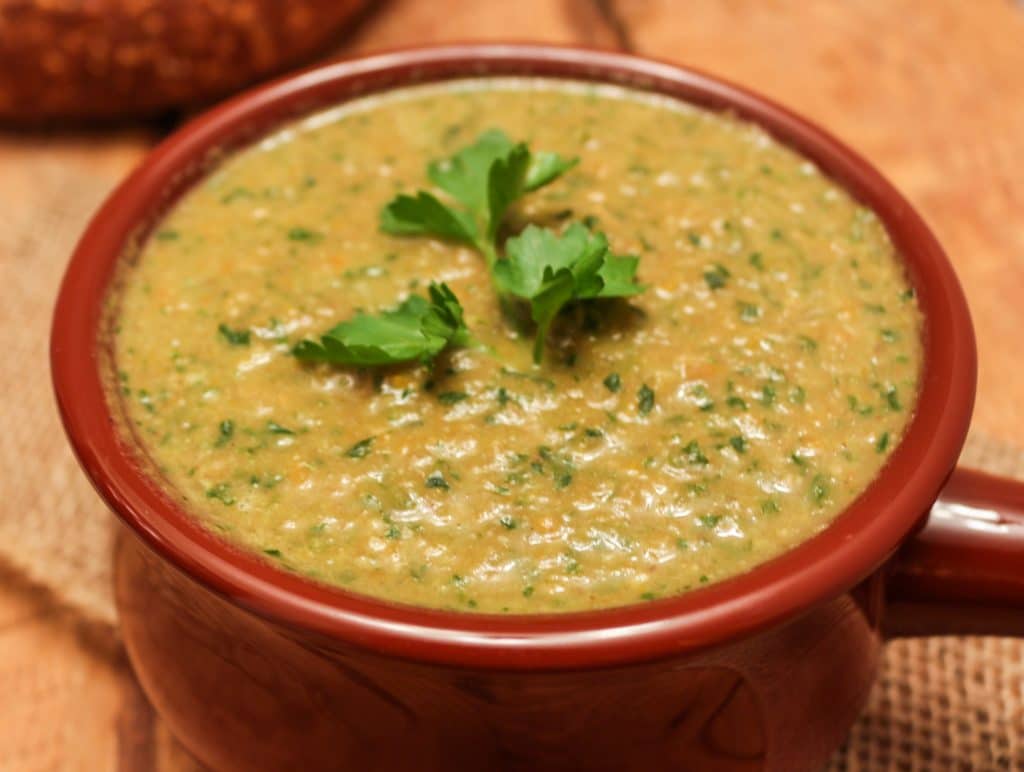 […] greenhouse tomatoes are sitting around our counters so into the stock pot they go! Some of them are still […]

[…] success in the greenhouse he built last year is beyond belief! We have overflowing baskets of peppers all over the house. […]

[…] Easy, convenient and tasty! Then, recently, Dave started the garden again and made a fantastic greenhouse where he grows scads of tomatoes and […]

[…] this week. Good thing, because the garden and greenhouse are going into prime harvest mode. Our greenhouse is delivering lovely tomatoes, herbs and peppers! YAY…except they always overwhelm me. So this […]

[…] great together. So I decided to combine these three in a crockpot with some our lemon thyme from the greenhouse and viola! A few tweaks and this yummy dinner was […]