Roasting and freezing peppers provide a handy Foodie tool in the freezer. Frozen roasted peppers flavor soups, stir-fries, casseroles, sauces and so much more! This is a quick tutorial on How to Roast Peppers for the freezer. What a great way to use the harvest! 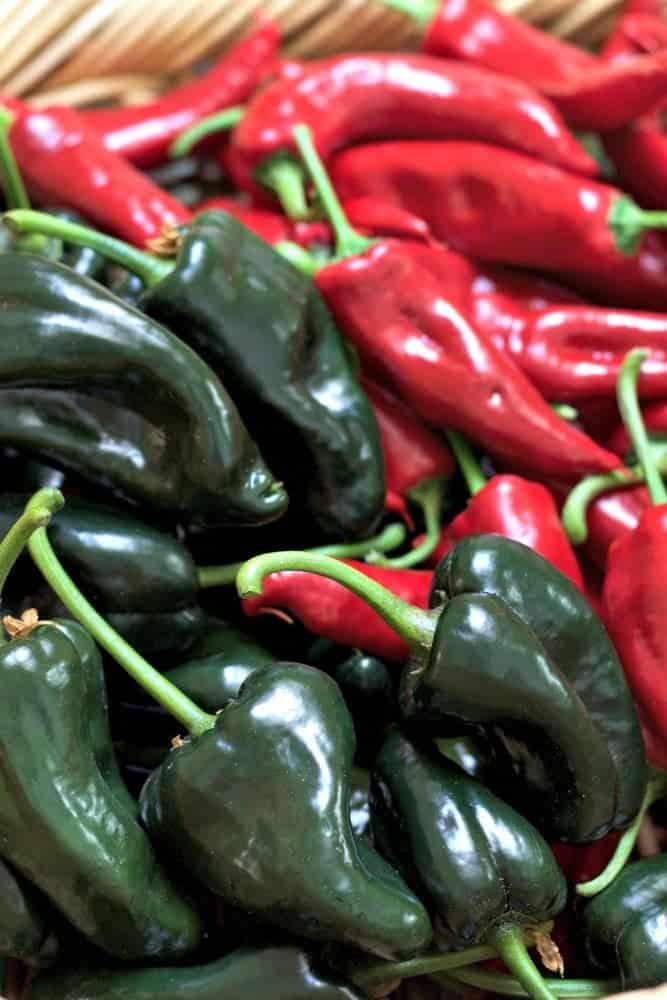 We love to roast Tibron and Krimson Lee Peppers. Here’s How to Roast Peppers for the freezer

Maybe you buy your peppers in huge quantities for pepper jam and other handy harvest recipes. They make good personal gifts! It’s a good idea to roast some for the freezer too.

We grow a LOT of peppers for two people. Last summer Dave grew Red Flames, Cheyennes, Carmens, Tiburons, and Krimson Lee peppers in our garden and greenhouse. Dave loves growing peppers. He keeps finding new varieties he wants to experiment with. If you want to get started growing peppers instead of buying them, and we highly recommend you do, Dave recommends these 5 Tips for Growing Perfect Peppers.  It’s never too early to think about next years garden 🙂

This is the second year I have roasted and froze peppers. I waited a year to post this tutorial. I wanted to be sure this method will work and hold all year in the freezer. IT WORKS! and we love them.

All winter, spring, and summer I whittled down that huge bag of frozen roasted peppers to add extra flavor and zip to soups, stews, and casseroles. I managed to stretch them out until our peppers came ripe this summer. We enjoyed them so much last year I’m roasting and freezing a huge batch again.

I put together a quick tutorial on how to roast peppers for the freezer.

You will want to do this! The smoky roasted peppers add so much to LOTS of recipes. Roasted Pepper Cheese Fondue Sauce, Roasted Red Pepper Sauce, Slow Cooker Harvest Pork Roast Dinner, and so many other fine recipes use roasted peppers to bump up the flavor.

Don’t buy roasted peppers in a jar. Condiments like this are so expensive to buy.  Make your own and keep them handy in the freezer. 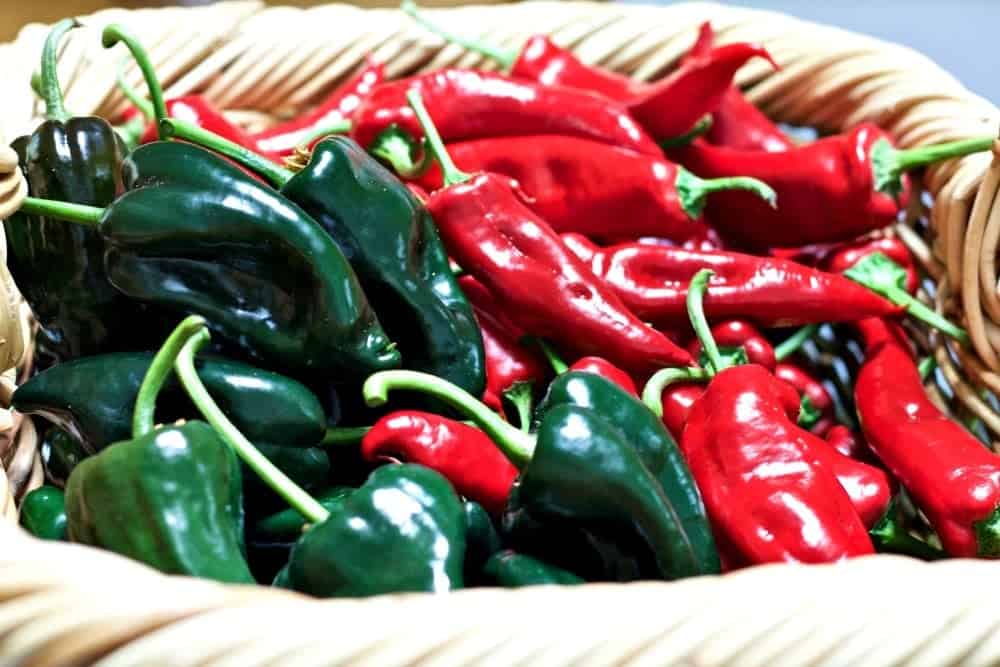 How To Roast Peppers for the Freezer:

NOTE: Some Pepper varieties peel easier than others. The green peppers you see in this tutorial are Tiburons. They are a breeze to peel. The long red Krimson Lee peppers take a lot of extra time and have some waste of the pepper flesh when peeled. So I  made a batch of my Roasted Pepper Tomato Soup as I peeled the peppers. I just threw the difficult ones in my soup as I peeled. It made a great soup with toasted cheese sandwiches for lunch. 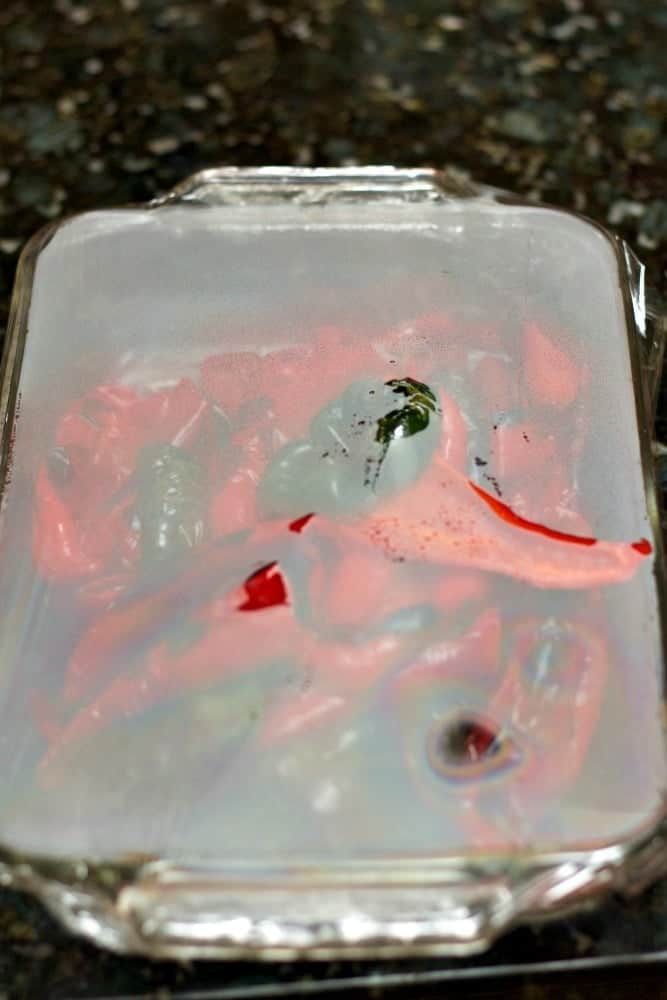 Steaming the peppers help loosen the skins for easy peeling.

TO PEEL THE PEPPERS:

Steam the roasted peppers to help loosen the skins:

Put the Hot roasted peppers right from the oven into a baking dish and cover them airtight with plastic wrap or any airtight lid. Now, Let them sit at least 15 minutes.

Note the pile of skins in the rear. The front piles are all peeled roasted peppers ready to freeze! They are so smoky and good!

To Peel Roasted, steamed peppers, pick up the peppers where the skin has bubbled off and pull the peel off the pepper flesh. Throw out or compost the skins. This sounds easy, and it is. But it takes some time to do a large batch. 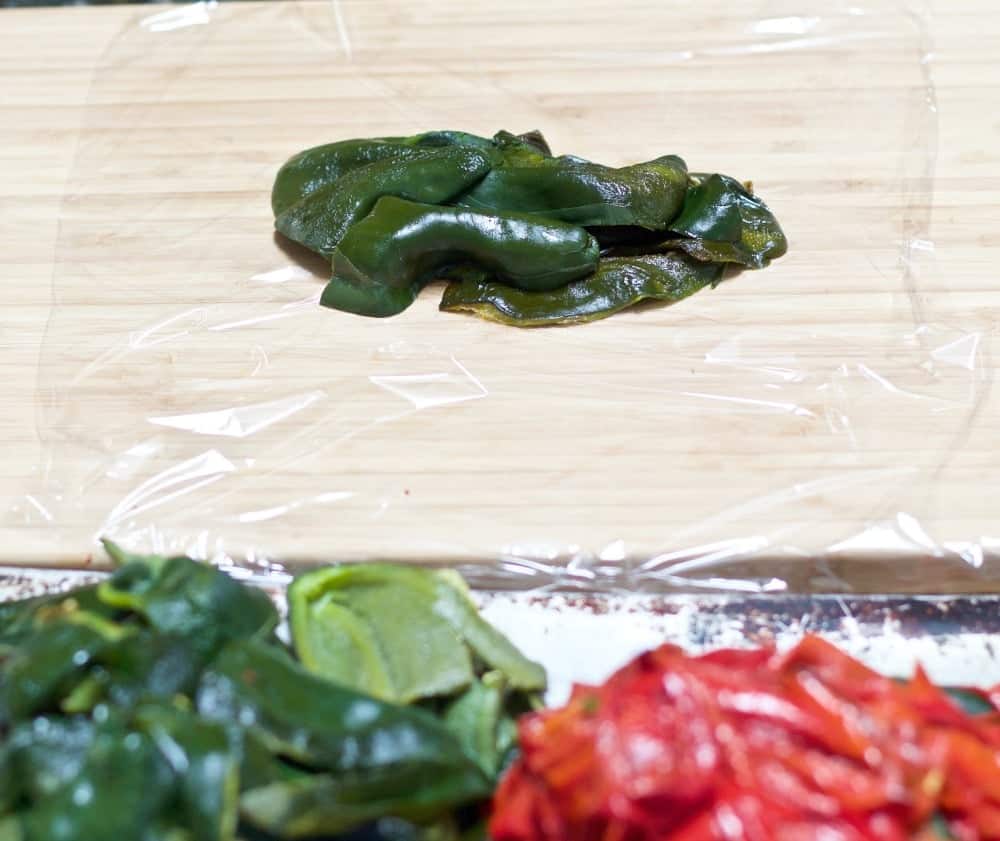 Lay out a sheet of plastic wrap. Layer the peeled peppers on the middle of the sheet.

Keep these individual packages fairly small to keep them fresh in the freezer.

The reason we put the peppers into small tube shaped portions is to reduce the freeze-thawing that occurs when you use a small portion from a huge frozen block of peppers. I did that last year. It was not easy to defrost just enough to use without reducing the food value of the remaining peppers. This is a better idea!

When you need roasted peppers in a recipe remove a single pre wrapped tube from the frozen ziplock bag pack and use only what you need. Rewrap the unused frozen roasted peppers and get the unused portion back into the freezer bag and freezeer. This way, You are protecting the flavor and nutrients of the peppers. 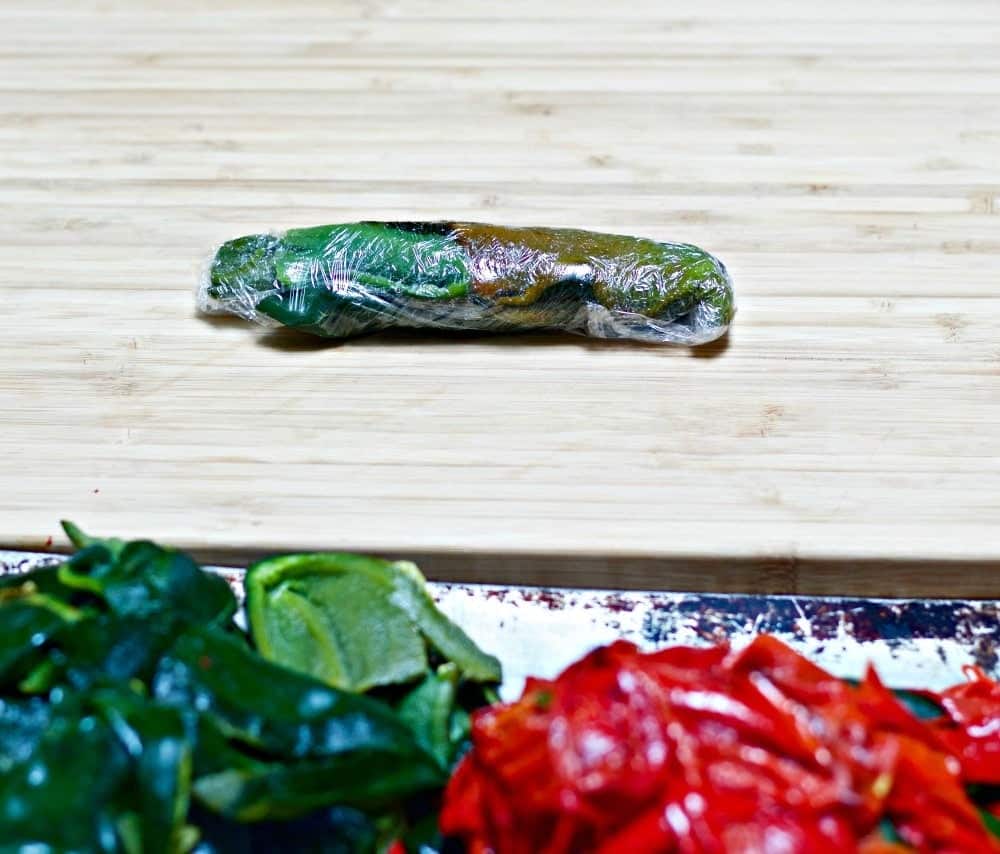 Roll the peppers into the plastic wrap. Squeeze out the air as you roll them up to avoid freezer burn. It should be shaped like a hot dog. 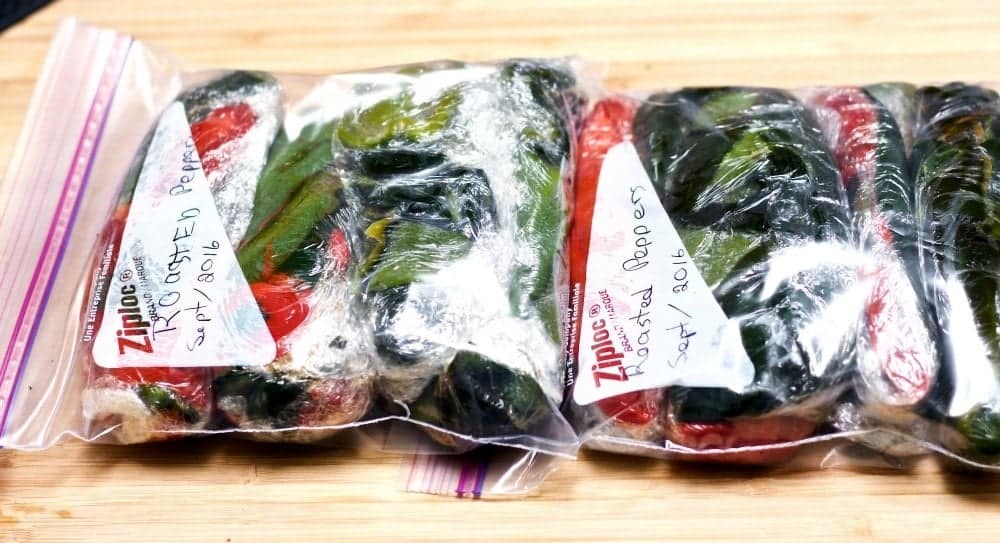 Stack the individual rolled plastic tubes of peppers into quart sized bags. Squeeze out the air between the tubes.

Label your freezer bags and freeze.

When you want to use the peppers:

That’s How to Roast Peppers for the freezer.  I hope you let me know in the comments how this works for you, what peppers you love to grow, roast and freeze, and which recipes you use them in. New ideas are welcome here. 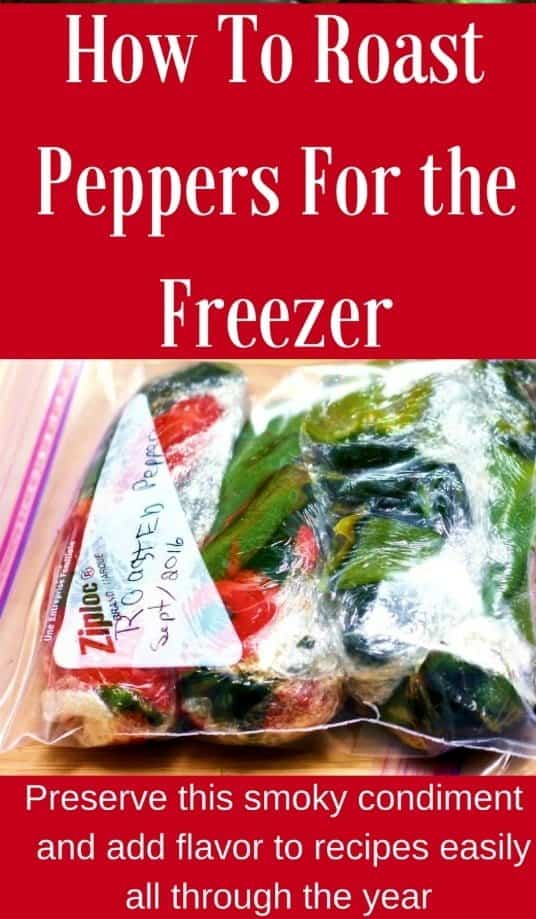 Thanks Girls and Dave too, I grow a large garden every year and this works well for freezing peppers for recipes like salsa.

Hi Carl, We appreciate the feedback. it's the method we use. So happy to know it works well for you too. Happy gardening.:)

Plastic waste is bad. Just take the air out of the platic bags which you should reuse.

Very good tips for roasting peppers. Only thing....you mention 'tubes' but there is nowhere an explanation as to what are these tubes. Are the peppers rolled into a 'tube' of saran wrap or wax paper? Explain please! Thanks

@Diane, I do my peppers the same way, except that I place them single layer on a cookie sheet and put in freezer for around half an hour where they start to freeze. Then I put them in a zip loc bag. They won't stick together. Can take out whatever size portion needed, whenever. Get the air out of the bag and reseal. Easy peasy! Oh, and mine are bell peppers. Works great!

Hi nan, I have reworded the sections that are discussing the packaging of the roasted peppers for you. I hope this clears up any confusion you have.

Quick note:PLEASE do NOT use wax paper. The post calls for plastic wrap so the peppers can be tightly wrapped, airtight, easily in small amounts. This is necessary to keep air out of the frozen peppers. Wax paper will not protect the peppers quite as well. Putting the small packages into heavier ziplock freezer bags add more protection from freezer burn and keeps those little packs easy to find.